Our volunteers help in parks, schools, senior centers and any other community gathering place.

You can, too! If you would like to become one of our volunteers, you must first complete the required training and attend an approved workshop.

Our Volunteers
Body & Brain Foundation exists because of dedicatation of Body & Brain practitionser to the ideals of Body brain and betterment of their communities. The Foundation send special Thank Yous to:

Of all the things to be grateful for, few people would put serious illness at the top of their list. So, many would be surprised at Katie Brisley-Logue’s attitude about her recovery from a transient ischemic attack (TIA). A TIA occurs when blood flow to a part of the brain stops for a brief period of time. A person will have stroke-like symptoms for up to 24 hours, but in most cases for 1 – 2 hours. Katie considers her mini stroke a 40th birthday “gift”, an awakening.

First, she considered it a message to reconnect with her body. Katie had been experiencing symptoms for weeks but kept ignoring them. Once released from the hospital, Katie promised herself that she would never again take her health for granted and started looking for a holistic answer. The following week she saw the cover of the Penny Saver classifieds announcing the opening of a Body & Brain Yoga Center in her neighborhood. So she decided to give it a try and was amazed that within 6 months she had fully recovered. 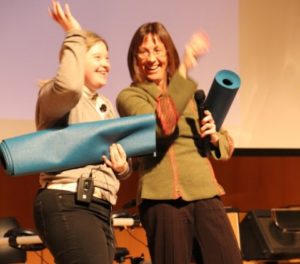 Katie also realized the techniques she learned to help her recover could be applied to individuals with developmental disabilities and autism at her agency. Combined with her existing commitment to help others, her desire to share Body & Brain Yoga and Brain Education led to a passion to teach others.

Armed with a vision, Katie completed several Body & Brain Yoga workshops, including those which we support her desire to teach, including Healer School and Brain Management Training. She also took the affiliated Brain Education Leadership course (BEL) 1, offered by IBREA and Power Brain Education. In the process of her training, she also noticed an interesting connection that would help her create the classes she envisioned.

Katie noticed, people with disabilities tend to rock their bodies when under stress, instinctively self-regulating their emotions. Their rhythmic actions mimic what she had learned during Brain Wave Vibration. Katie shared, “Professionals in social services are often taught to extinguish this rocking behavior, which seemed counter-intuitive.” She observed the clear connection between what she was learning during yoga class and what her clients were doing instinctively.

Katie created classes for kids with disabilities and autism at the Union Square Body & Brain Yoga Center in New York. Her classes have been successful in helping the kids get in touch with their potential. Jeffrey, a 16 year old student with cerebral palsy, now co-teaches her kids class. He participated in Junior Dotong Leadership last summer and HSP training with Ilchi Lee in January. Another older student, Kirsten, has Downs Syndrome and co-teaches stress management to staff, and parents with Katie at her agency. They even recently presented a teaching demonstration in front of 450 managers! “People with disabilities are, generally, considered non-contributing members of society. Here’s someone with disabilities teaching stress management to managers!” exclaims Katie. “Brain Education saved my life and is the key to unlocking so much hidden potential in others.”

Katie is now integrating her yoga practice into her personal and professional life. Recently, Katie completed the Brain Education Leadership 2 advanced certification for teaching special needs children and successful aging. She is a Body & Brain Master, and LifeParticle Ambassador. She has expanded her Sr. Human Resources Manager role in her agency to include Wellness Coordinator. In the community, Katie conducts workshops at other social services agencies, duly dubbed, “Relax Your Body, Recharge Your Brain.” She recently conducted an energy meditation circle during a visit home to Ireland, and plans to conduct Skype sessions with a fibromyalgia support group her sister in England started after taking a few Body & Brain Yoga classes.

Katie’s vision is to expand her efforts citywide, statewide and internationally. Brain Education helped Katie recover from TIA, follow her passion, trust her brain, and live her dream to help those with disabilities live happy, healthy and productive lives.