Our volunteers help in parks, schools, senior centers and any other community gathering place.

You can, too! If you would like to become one of our volunteers, you must first complete the required training and attend an approved workshop.

Our Volunteers
Body & Brain Foundation exists because of dedicatation of Body & Brain practitionser to the ideals of Body brain and betterment of their communities. The Foundation send special Thank Yous to: 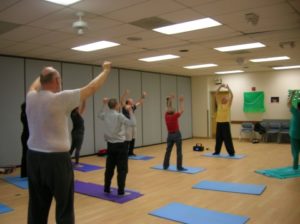 Five years ago, David Plummer was on total disability, suffering from constant pain and chronic fatigue. Then he discovered Dahn Yoga. Today he has not only recovered his health, but teaches Albuquerque seniors how to take the journey back to wellness.

When Dave became a practitioner of Dahn Yoga, he had never taken any kind of yoga class before, nor indulged any of the martial arts. So inspired by positive results, he decided to also train in Brain Education and also achieved Black Belt 1 status in DahnMuDo, as well as chakra healing and meditation.

“It saved my life,” says Dave, “and it became important for me to share the way back to health with as many people as possible.”

And today, he shares that journey with many inspired seniors, whose own path to wellness fills his heart with joy.

One joyful senior is Sam Thompson, who studies Dahn Yoga with Dave at the North Valley Senior Center. At the youthful age of 77 (very soon to be 78), Sam takes classes twice a week, but would be thrilled if there were classes 4 times a week.

“Dave is an outstanding yoga master,” she proudly says. “He is so accepting and gracious. All students can relate to him.”

She continues, “I rarely miss a class, it is so important to my life. Oh yes, I took yoga before, and even Tai Chi, but Dave is the best! My favorite exercises are breathing and stretching. And he also incorporates meditation in each class.

“Eighteen months ago I awoke with neck pain and sought advice from my primary care physician. Turns out I have a moderately degenerated spine. I was given three options: narcotic patches, physical therapy, or acupuncture. I chose the acupuncture and went twice a week. At the same time, I was taking Dahn Yoga with Dave.”

She pauses, and her happiness is contagious. “I have not had acupuncture now for a year. I sleep great at night, and I attribute it all to Dahn Yoga and Dave. I feel great and have a really good outlook on life!”

Sam speaks of Dave’s dedication. “He isn’t doing it for the money, that’s for sure! He does it because watching us all progress is his reward.”

She shares how the class first started with two or three students, and now there’s fifteen. “I think the men outnumbered us this last class!”

In his DahnMuDo class, there is a retired pediatrician in his 70’s. By learning standard joint opening and OinKi bo Kyung ong and Qi gong, the doctor has gotten stronger and his health has improved.

Of his students, Dave says, “Their posture is not perfect, but …it’s a matter of them moving their bodies and feeling their energy. Their health has improved with the practice. They do what they can do, and they have seen some benefit. Typically, seniors have trouble with balance and the DahnMuDo has helped a lot with that.”

Dave is now reaching out to the community even more by sharing the story of LifeParticles and Change events at various senior centers. By showing the videos and teaching the concepts, he wishes to reach larger groups.

With such passion and devotion, Dave is helping to change the lives of Albuquerque seniors.